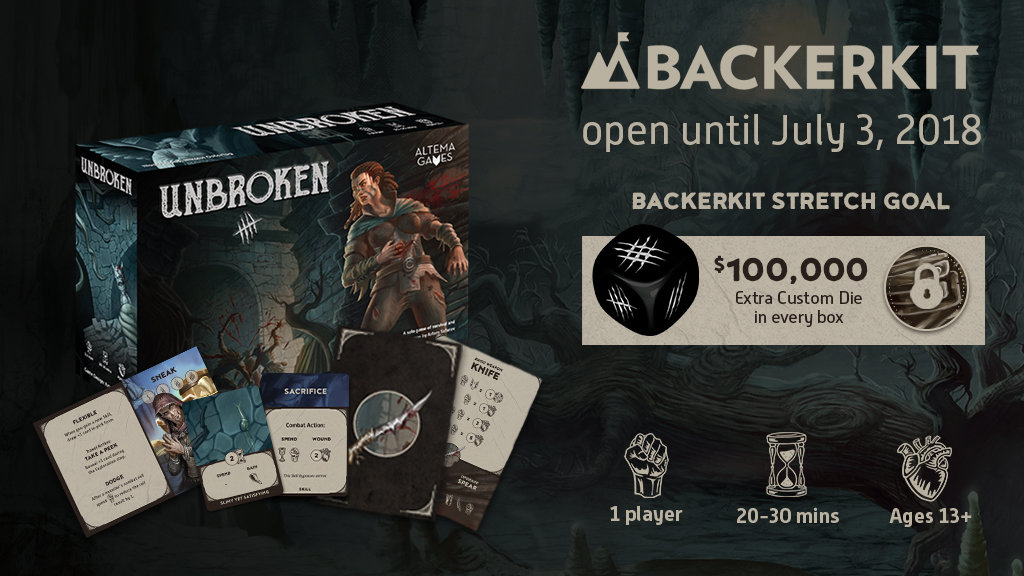 Lost Your Survey?
FAQ: Unbroken: a solo game of survival and revenge

Are we going to have more monsters?

No. The 24 monsters included in the game have been carefully designed and tested. While no new monsters will appear as part of this campaign - we look forward to introducing new foes in the upcoming expansion! (once these have been tested appropriately)

Is there going to be a 2-player co-op mode like what Rahdo mentioned?

No. From the outset I wanted to focus Unbroken to be the very best solo game it can be. There are already so many excellent co-op games out there! However, both Rahdo’s idea and people’s enthusiasm for co-op variant is definitely demonstrating interest for this. So this is something I will consider for a future expansion when I can work through this idea appropriately. What I don’t want to do is to put out sub-par half-baked content. Thank you for understanding.

Are there going to be versions in French, German, Spanish etc?

No. The current project’s scope only focuses on the English physical game. The rules and Print and Play materials will be made available in French, Spanish, German and Italian.

Are the cubes all going to get shifted if you bump the table?

No. I know it seems like that’s basically inevitable but this is not an issue that came out at all with testing. Having said that - we do have a late stretch goal for a layered tracker sheet that would hold the tracker cubes in place by these being placed in small indentations (similar to Scythe). Let’s hope we clear that goal!

Unbroken is a game that was made to be expanded. We have some designs in the works already. When we are ready to release it - backers who support at Revenant and Nemesis levels will be the first ones to receive the Print and Play files for the expansion content. They will have exclusive access to it for 2 months before it will be available for public access.

How does the naming of monster at Nemesis level work?

If you back at the Nemesis level you will get to pick a monster (you will pick 3-4 to ensure that we can accommodate people’s competing priorities). You will then create a name for that monster (e.g. Sak’rah the Orc Brute or Rotgut the Ogre). The name will need to be approved by the creator based on fitting the theme and setting of the game. So no Boaty McBoatface (sorry). The name would then appear on corresponding cards in all copies of Unbroken and you will know that you contributed personality to one of the creatures in your new favourite solo game!

Can I get the game later on using the Pledge Manager if I pledge $1 or $5?

Yes you can. There will be a Backer Kit for the project where you can add copies of the physical game to your order.

Is the game going to be available in languages other than English?

We have stretch goals to make the rules and the Print and Play files available in French, Spanish, Italian and German. Physical production of the game in another language is another matter entirely that would likely be too costly for this campaign to cover. So while we are exploring our options for that - so far the extra languages are limited to digital content only. Anyone who pledges at Survivor ($5) and above will receive access to files in all available languages.

What are the card sizes?

Will monster stories be added to the physical copy of the game?

No. The monster stories will be available in digital format only. Printing them separately would push the weight too far for shipping purposes. Printing these on the backs of monster cards would be messy and would interfere with the clean look we had in mind for Unbroken. We will explore making a lore booklet available either as a core part of the expansion in an upcoming campaign or as an optional add-on.

Do Stretch Goals appear in all games or do I need to pledge extra for them?

All unlocked stretch goals will be featured in every physical copy of Unbroken, including Preorders placed via BackerKit. If you pledged at Avenger or above - you will get everything that’s been unlocked.

I'm being charged add-on shipping fees for selecting add-ons in my survey — why?

All shipping fees for pledges and preorders will be recalculated on the last step of your survey. If you’ve selected add-ons in your survey, your shipping total may be higher than the pledge-level shipping fees that were collected on Kickstarter.

Apologies that this was not made clearer in the original campaign page, but all the add-on shipping fees currently showing in the survey are accurate and will be required to ship your order.

Can I get a refund (full or partial) for my contribution on Kickstarter?

Since BackerKit doesn’t have any access to the funds raised during the original Kickstarter campaign, we’re not able to provide refunds for transactions made on Kickstarter.

In order to pursue a refund of your Kickstarter contribution any further, please contact the Unbroken Creators directly on Kickstarter (to contact the creator, click on the “Created by” link at the top of their campaign page, then scroll down to the bottom of the creator info and click “contact me”).

What currency is being charged in BackerKit for add-ons?

Despite the original campaign being collected in Canadian dollars, all add-ons and shipping fees being applied in your BackerKit survey are charged in US Dollars ($).

BackerKit is a service that crowdfunded project creators use to keep track of hundreds to tens of thousands of backers—from shipping details, pledge levels, preferences and quantities, whether they have paid or had their card declined, special notes, and everything in between!

The BackerKit software and support team is independent from the campaign’s project team—BackerKit does not handle the actual reward shipping. For more information about the preparation or delivery status of your rewards, please check the project's updates page.

How does BackerKit work?

After the campaign ends, the project creator will send you an email with a unique link to your survey. You can check out a walkthrough of the process here.

I never received my invitation. How do I complete the survey?

The most common reasons for not receiving a survey email is that you may be checking an email inbox different from the email address you used to sign up with Kickstarter, Indiegogo or Tilt Pro account, or it may be caught in your spam filter.

Confirm that the email address you are searching matches the email address tied to your Kickstarter, Indiegogo, or Tilt Pro account. If that doesn’t work, then try checking your spam, junk or promotions folders. You can also search for "backerkit” in your inbox.

To resend the survey to yourself, visit the project page and input the email address associated with your Kickstarter, Indiegogo or Tilt Pro account.

How do I update my shipping address?

When will my order be shipped, charged or locked?

That is handled directly by the project creator. BackerKit functions independently of the project itself, so we do not have control of their physical shipping timeline. If you want to check on the project’s status, we recommend reading over the project's updates page.

I completed the survey, but haven't received my rewards yet. When will they arrive?

As BackerKit does not actually handle any rewards or shipping, the best way to stay updated on the shipping timeline would be to check out the project's updates page.